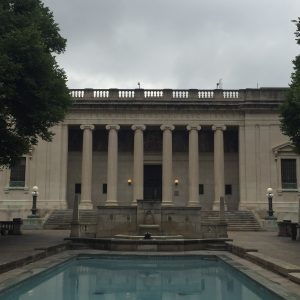 Constructed through the funding and advocacy of the Camden Woman’s Club, Cooper Library in Johnson Park was originally established in the Cooper Mansion, and later rebuilt by Eldridge R. Johnson in 1914. The library is located on Second and Cooper Streets in the Cooper Grant section of Camden, New Jersey. The Camden Woman’s Club, active between 1894 and 1919, advocated for the creation of a public library in the Cooper Mansion. The club raised funds and collected books to establish the library for the city through a Public Library Committee. The Woman’s Club began holding meetings in the Cooper Park Public Library by 1907. The women who served in the club were instrumental in the establishment of a public library in Camden. Eldridge R. Johnson, founder of the Victor Talking Machine Company and inventor of the modern phonograph, donated the park and library to the City of Camden after its 1914 to 1930 construction was complete. Following its completion, the library became a cultural and recreational hub for the city, as the library was surrounded by fountains and sculptures. The site was added to the New Jersey and National Registers of Historic Places in 1980 and was revitalized between 1997 and 2005. In 2017, the library was owned by Rutgers University, Camden, and housed its Walt Whitman Arts Center.