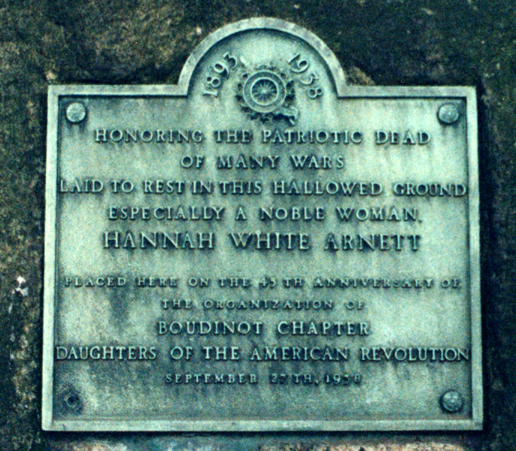 This memorial “honoring the patriotic dead of many wars, . . . especially a noble woman Hannah White Arnett” was erected in 1938 in the cemetery of the First Presbyterian Church, Elizabeth, New Jersey, by the Boudinot Chapter, Daughters of the American Revolution.

Arnett (1733-1823) was honored for preventing a group of Elizabethtown (now Elizabeth) men from proclaiming their loyalty to Great Britain in exchange for “protection of life and property.” Arnett overheard the men who were meeting in her house discussing the offer. Storming into the meeting, she called them traitors and cowards. Her husband Isaac tried to get her to leave the room, but she continued to berate the men and announced that she would leave her husband if he deserted the Revolutionary cause. Finally the men refused the offer. White and Isaac and three of their children who died in infancy are buried in the cemetery.

Another marker on the cemetery wall that is now to worn too read originally read in part, “Near here rests Hannah White Arnett…Her patriotic words, uttered in the dark days of 1776, summoned discouraged men to keep Elizabethtown loyal to the cause of American independence.”

Arnett’s deed was publicized many years after her death by Mary Smith Lockwood, who helped found the Daughters of the American Revolution (DAR) in 1890. Although for many years, the DAR refused admission to some groups of women, including Jews and African Americans whose descendants fought in the American Revolution, it has played an important role in preserving and promoting various aspects of women’s history.