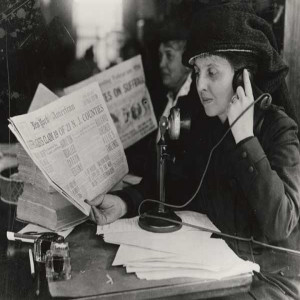 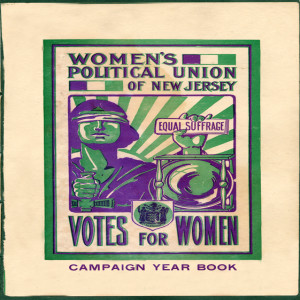 Logo of the Women’s Political Union of New Jersey

By the early years of the 20th century, the woman suffrage movement in New Jersey had been in existence for forty years. Discouraged by the lack of success in their work, suffragists in the New Jersey Woman Woman Suffrage Association (NJWSA) had trouble getting their message across to the public. In 1908, however, the state suffrage movement began to be re-invigorated by a new generation of younger women, and it gained increasing visibility. In that year, Mina C. Van Winkle of Newark organized the Equality League for Self-Supporting Women of New Jersey to draw working women, both professionals and wage earners, into the suffrage movement. Inspired by her New York friend, Harriot Stanton Blatch (the daughter of suffrage pioneer, Elizabeth Cady Stanton), Van Winkle espoused an overtly activist approach to suffrage work..

Also in 1908, the NJWSA elected as its president a strong and imaginative leader, Clara Schlee Laddey, a well-to-do German immigrant. In 1912, Laddey was succeeded by a young, energetic, Plainfield women, Lillian Ford Feickert, who led the association until 1920..

In 1912 the Equality League changed its name to the Women’s Political Union of New Jersey (WPUNJ) and became an affiliate of the much larger NJWSA. Van Winkle headed the Union until it merged with the NJWSA in 1916. The logo of the WPUNJ, above right, featured the traditional blindfolded figure of Justice, signifying judicial fairness; it also suggests that women have been kept in ignorance of their rights, with justice denied them. Hope is indicated by the rays of the rising sun behind Justice, who holds an Equal Suffrage sign in her left hand and the traditional sword of power in her right.