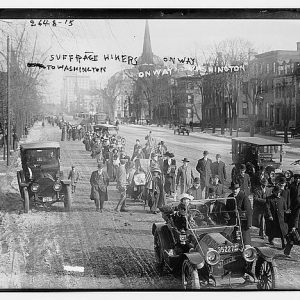 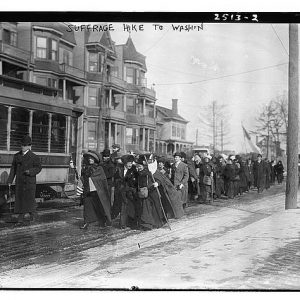 On February 12, 1913, the Suffrage Hikers began their march from Newark, New Jersey on their way to Washington, D.C. for the National America Women Suffrage Association parade set for March 3, the day before the inauguration of President Woodrow Wilson. The hikers passed through Elizabeth and New Brunswick in New Jersey as well.

The hikers, led by New York’s Rosalie “The General” Jones and Ida “The Colonel” Craft, were a group of sixteen women marching to Washington. When they arrived in Newark to begin the march, about two-hundred other supporters joined their “ranks.” The hikers can be seen walking through the streets of Newark, followed by their supporters in a long procession. The Newark Equal Suffrage League and the Essex County Suffrage Society accompanied the hikers as well. Many suffragists marched with the hikers as far as Elizabeth, the next stop on their tour to Washington.