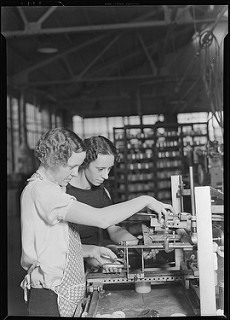 The Wheaton Glass Company of Millville, New Jersey, provided different titles for the same tasks performed by men and women. Male workers were employed as “selector-packer-stackers,” while women were employed as “selector-packers.” By giving men a different title, the company could pay them higher wages than the women performing similar tasks in the warehouse.

In 1970, Schultz v. Wheaton Glass Co. was heard before the United States Court of Appeals for the Third Circuit. The case was named for George P. Schultz, the Secretary of Labor at the time, and the defending company. On January 13, the court determined that a job that is “substantially equal” in terms of tasks, but not necessarily in the job description or title, is protected by the Equal Pay Act of 1963. Therefore, women cannot receive lower wages for a job with similar tasks to those of men.

The case was an important test in the upholding of the Equal Pay Act and helped to further define the limitations of the equal pay chapter of the Civil Rights Act of 1964. The meaning of the word “equal” was clarified by this case to mean “substantially equal” rather than “identical.” Schultz v. Wheaton Glass Co. is still studied as a landmark case in equal pay for women in the workplace.