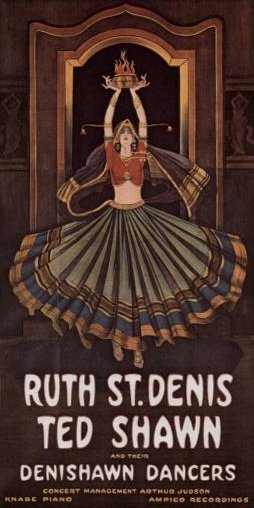 Ruth St. Denis (1879-1968), dancer and choreographer, was born in Newark and educated in Somerville. She left a lasting mark on the development of modern dance. She was particularly interested in exotic lands and the dance steps, costumes and settings associated with them, as well as in using dance to explore spirituality. In 1914, she teamed up with the dancer Ted Shawn (who later became her husband) to form the Denishawn Company, which performed many works derived from Asian and Anglo-European sources.  Doris Humphrey and Martha Graham were among her students. She had a major impact on ballet and modern dance.