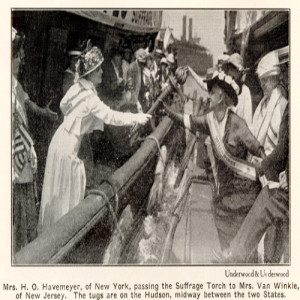 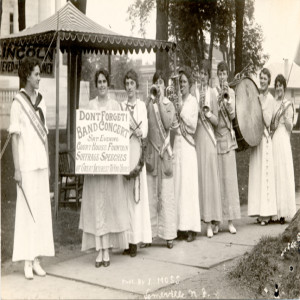 Like suffragists nationwide, during the campaign for women suffrage that led to the ratification of the 19th Amendment in 1920, New Jersey suffragists used a variety of publicity ploys to gain support for their cause. Public concerts, lectures, and performances raised money for suffrage work, while parades of suffrage supporters, automobile processions, and ball games captured the attention– and hopefully the sympathy– of onlookers and male voters.

During the 1915 campaign for a New Jersey constitutional woman suffrage amendment, the Women’s Political Union was particularly effective in staging attention-getting media events. During the summer of 1915, suffragists in New Jersey, New York, and Pennsylvania collaborated in a publicity event to benefit the state campaigns in all three states. The Torch of Liberty, carved of wood with a bronze finish, made the rounds of towns and cities across the three states, occasioning suffrage demonstrations wherever it stopped.

In August 1915, the torch crossed the Hudson River. New Jersey and New York suffragists went by tugboat to meet in mid-stream, where the torch was passed to Mina Van Winkle, president of the Women’s Political Union of New Jersey, by Louisine Havemeyer, a prominent suffragist and patron of the arts from New York City. The torch then went on its way via Rahway, Perth Amboy, Keyport, Keansburg, Atlantic Highlands and on down the shore to capture the interest of vacationers at Long Branch and Asbury Park. In Asbury Park, the suffrage torch disappeared. Much publicity was given to the mystery of its whereabouts, until at last it turned up in a Philadelphia streetcar, bedecked with streamers in the WPU colors of green, white, and purple. With much fanfare the torch was returned to the Roseville section of Newark, where Dr. Anna Howard Shaw, president of the National American Woman Suffrage Association, was giving a speech.