Painting of a scrubwomen by Baroness Hyde de Neuville 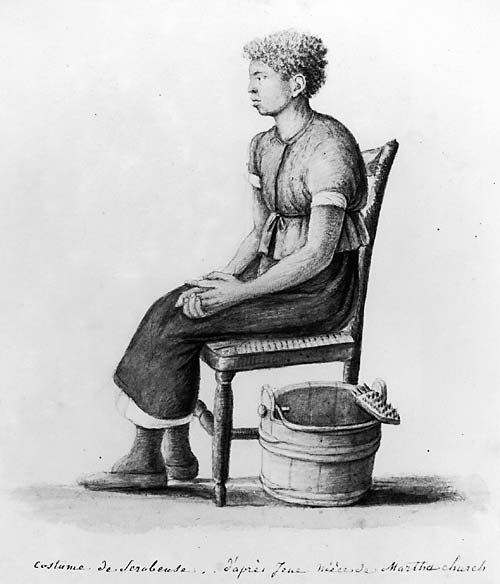 Baroness Hyde de Neuville, (Anne Marguerite Henriette de Marigny Hyde de Neuville), arrived in New Jersey from France, with her husband, in 1807. After the French Revolution, she secured the life and safe passage of her husband, who was a royalist, by traveling alone across Europe to intercede with Napoleon.  In order for the couple to escape from France, she posed as her husband’s mother until they arrived safely in the U.S.  They settled on a merino sheep farm in the New Brunswick area.  For a number of years, the couple journeyed to New York City and to various settlements along the Hudson. After Napoleon was defeated and the King restored to the throne, the de Neuvilles returned to France.  However, the Baron was rewarded for his loyalty and named French Ambassador to the United States, so the couple returned there to take up residency in the new capital, Washington.  Baroness Hyde de Neuville continued to produce watercolors, many of which survive to tell us about life during the Federalist era.  She often depicted scenes of Native American life, as well as pictures of African Americans.  Both were rather rare subjects for an artist to choose, especially one committed to keeping a monarchy in power.