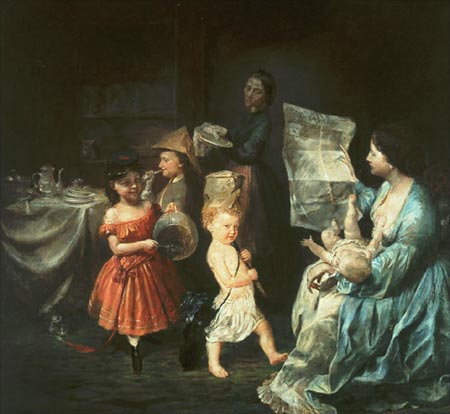 “War Spirit at Home,” one of the most popular paintings of the mid-19th century, painted by Newark resident Lily Martin Spencer. Spencer emigrated from France to Ohio as an eight year old. Her talent as a painter was recognized early and supported by a patron. In 1844, she married Benjamin Spencer. The couple eventually settled in Newark, where they raised thirteen children. Spencer was one of the most prominent artists of the mid-to-late 19th century and supported her family through her career. Her husband managed the household and served as her business manager. Her mother belonged to the Utopian group known as the Fourierists, which supported communal living as a way to provide child care so women could have free time.  Spencer documented the family and domestic life of her era through portraits and genre paintings. In this painting, she shows the impact of the Civil War on family life.

Lithographs of Children.” Imprint: Journal of the American Historical Print