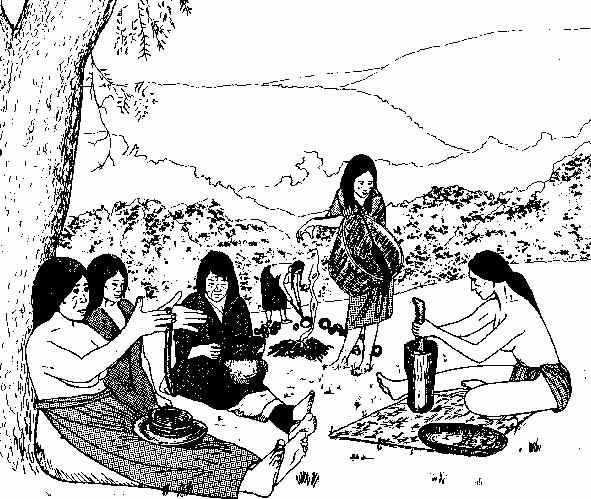 This illustration depicts various aspects of pottery making by Lenape women. Pottery vessels were important in late Late Woodland times, even as cooking pots and jars are today. Clay that was free of stones was dried and pulverized. When ready for use, the dried clay was mixed with water, and a quantity of crushed grit was added to serve as a binder to prevent cracking. When the clay had reached the right consistency it was formed into coils or slabs which were molded together to form a pot. The shape varied, and the pot might have a collar or simply an out-turned rim. The finished vessel was left to dry leather-hard, after which it was decorated with geometric designs incised or cut into the rim, collar, shoulder, or neck. (Earlier styles were decorated with cord-impressed designs.) The decorated vessel was then placed in a shaded place to finish drying slowly. All remaining moisture had to be removed, otherwise it would turn to steam and destroy the pot during firing. The Indians of the Northeast had no potters’ wheel or pottery kiln; all vessels were fired above ground. Seasoned wood or corn cobs were stacked over and around the pots on a clear, windless day, and a fire was ignited and kept burning until all the pottery vessels were thoroughly baked. Ceramic vessels were a great advantage over stone boiling because they could hold liquids and could be placed directly over a cooking fire.