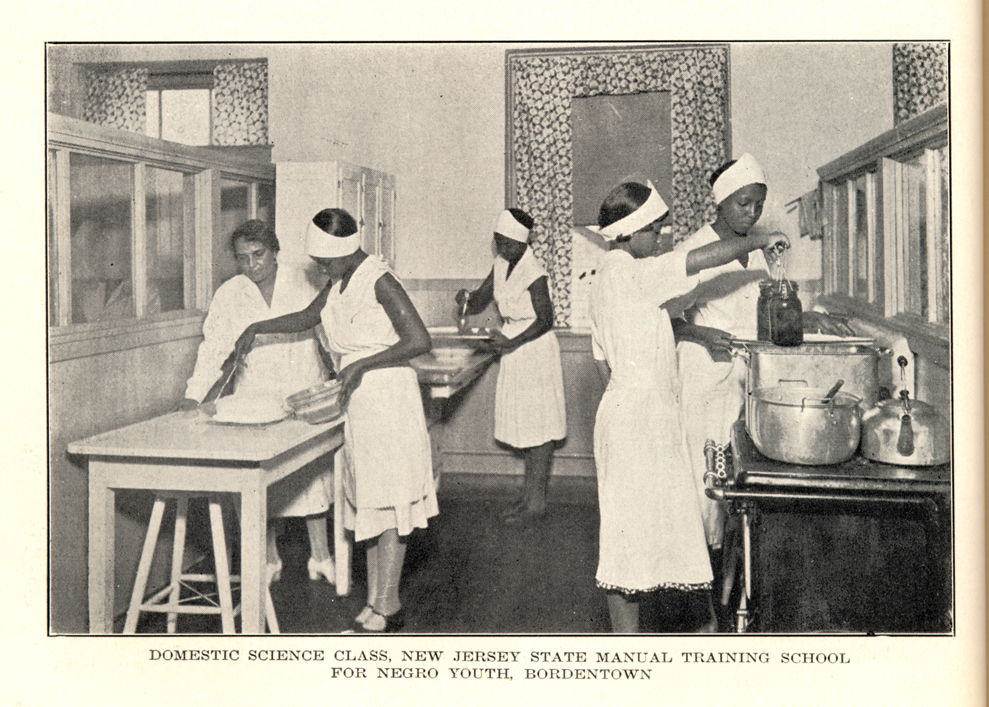 The Manual Training and Industrial School in Bordentown was an important institution for the education of young African American women. It was founded in 1886 by an African Methodist Episcopal Minister, the Reverend W. A. Rice, in an effort to introduced the vocational education concepts of Booker T. Washington. Sometimes celebrated as the “Tuskegee of the North,” The Bordentown School graduated approximately 100 students a year. The school focused on vocational trade training and academic studies for girls and boys from grades 8 to 12. In 1894, the state took over the school, which became known as the New Jersey State Manual Training and Industrial School for Colored Youth.

This photograph, c.1932, of a domestic science class for young African American women, documents the school’s goal of training girls for employment that was thought appropriate at the time. The school was praised by educators such as John Dewey for its combination of manual and academic training. The photo appeared in The Negro in New Jersey by noted Black sociologist Ira De A. Reid, who documented the living conditions of Blacks in New Jersey for the National Urban League and the federal government.

The school closed on June 30, 1955. The campus then became the Edward R. Johnstone Education and Training Center. In 1996, the Johnstone Campus was turned over to the Juvenile Justice Commission. The Manual Training and Industrial School has been placed on the state and national register of historic places. A monument honoring the school’s role in the education of New Jersey’s African American girls and boys was dedicated by Secretary of State Regena Thomas on October 6, 2002.