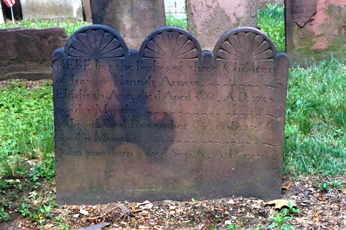 This gravestone is a reminder of the high rate of infant mortality in the 1700s. It marks the grave of three children of Isaac and Hannah Arnett, who died at the ages of 3 months, 6 months and on the day of birth. The inscription reads: HERE lie the Bodies of three Children Of Isaac & Hannah Arnett Elizabeth Ann, died April 6th A.D. 1758 Aged 3 Months, Abigail died December 1 A.D. 1766. Aged 11 Months John was Born & died Sept 6 A.D. 1770.

Infant mortality rates remained high well into the twentieth century. For example, a 1925 study conducted in Pittsburgh, Pennsylvania found that one of every three babies born died young. The situation improved throughout the 1930s and 1940s with advances in medicine, improvements in sanitary toilet facilities and clean drinking water, and public health education for pregnant women and mothers.