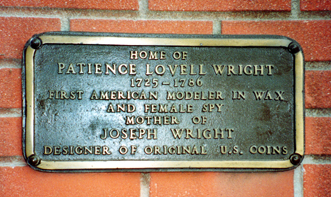 Patience Lovell Wright (1725-1786) was born in Bordentown, into a well-to-do Quaker farming family.  As a child she showed great promise as an artist. However, it was not until she was left a widow with five children to support that she returned to making sculpture as a source of income. Initially, she practiced creating pieces using bread dough.  When she felt she was proficient enough, she moved to the medium for which she became famous, modeling in wax. Her reputation derived from her skillful portraits of public figures. Wright moved to England in 1772 and with introductions from Benjamin Franklin, she received commissions for portraits of well-known living people of her time, among them William Pitt. She made wax models of them and created the first traveling exhibition of waxworks. Outgoing and voluble, Wright was embraced by British society and the king and queen, whom she addressed as “George” and “Charlotte.” With the outbreak of the Revolutionary War, Wright is believed to have sent secret messages to the Americans. According to one story, she supposedly concealed messages in the wax sculptures that she sent to her sister who was running a wax museum in Philadelphia. A contemporary of Wright’s commented on the “vigor and originality of her conversation.”