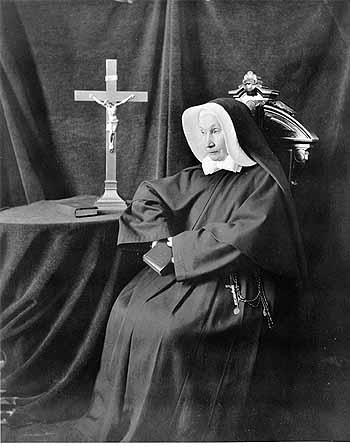 Image courtesy of the College of Saint Elizabeth, Morristown, NJ

Mother Mary Xavier Mehegan (1825-1915) emigrated from Ireland to New York in 1842.
She made her profession of vows in 1847 as Sister Mary Xavier and spent the next twelve years as a Sister of Charity in New York.

After her time in New York, Mother Xavier began her work as the mother superior of the Sisters of Charity of New Jersey. In 1860, the order opened their motherhouse in Madison at Convent Station. Under her leadership, Mother Xavier opened seven hospitals, along with nurses’ training schools, homes for the elderly, orphanages, and a residence for working women. Among her most significant accomplishments, Mother Xavier helped found the College of Saint Elizabeth which made history as the first four-year women’s college in the state. This was one of the first Catholic colleges for women in the United States.