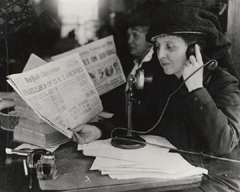 Mina Van Winkle (1875-1932) of Newark organized the Equality League for Self-Supporting Women of New Jersey in 1908.

The purpose of the league was to draw working women, professionals, and basic wage earners, into the suffrage movement. By the early 20th century, the suffrage movement had been in full force in New Jersey for 40 years. Suffragists were discouraged by their lack of success with the New Jersey Woman Suffrage Association (NJWSA). Van Winkle and fellow suffragists helped reinvigorate the movement with the newly established Equality League. In 1912, the League changed its name to the Women’s Political Union of New Jersey. Van Winkle headed the Union until 1916.

The well-known logo featured the traditional blindfolded figure of Justice who signified judicial fairness. It also suggested that women were kept in ignorance of their rights for a long time and denied justice. The rays of the sun behind the Justice figure stands for Hope. Justice held the Equal Suffrage sign in her left hand and a traditional sword of power in her right hand.