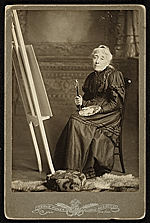 Lilly Martin Spencer (1822-1902) of Newark is one of the most popular American painters of the mid-19th century.

There is a great deal of mystery surrounding Spencer’s artistic beginnings, one tale states that Spencer had decorated the plaster walls of her family’s farmhouse with charcoal drawings. These elaborate depictions, according to legend, became something of a tourist attraction in the community. The local press caught wind of the young girl’s talents and so began Spencer’s illustrious career as a painter.

Spencer was an independent woman who made a living as a successful portrait painter at a time when very few women had access to professional opportunities. Her husband, Benjamin Spencer, assisted his wife in her career by preparing canvases, managing her business affairs, and sharing in the housework and care of their thirteen children. They were quite the modern couple.

Her genre paintings, which depicted reassuring moments of family life and reflected 19th-century tastes, were no longer in high demand at the start of the American Civil War. The previous period of general optimism felt by most Americans was lost during wartime. Nevertheless, Spencer had already produced a large body of work that placed her among the very best American artists. Over the years, Spencer’s work has been included in the 1939 Metropolitan Museum of Art’s retrospective exhibition of 300 years of American Art.