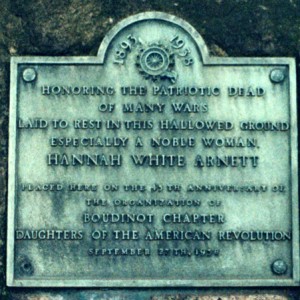 Hannah White Arnett (1733-1823) of Elizabeth has been lauded for her small role in the fight for American independence.

She prevented men from proclaiming their loyalty to Great Britain in exchange for “protection of [their] life and property.” Arnett overhead the discussion of a group of men that was meeting in her home. The decision at hand was to either accept or reject the offer made to them by the British. Upon hearing this, Arnett stormed into the room and accused the men of being cowards and traitors. Arnett’s husband Isaac attempted to remove Arnett but she was relentless with her accusations. Arnett even threatened to leave her husband if he deserted the Revolutionary cause. In the end, the men refused the offer made to them by Great Britain and remained committed to the fight for American independence. Arnett’s actions were not publicized until after her death.