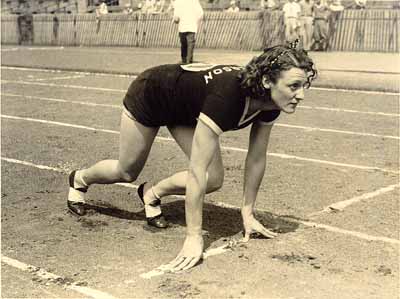 Eleanor Marie (Egg) Kratiger (1909-1999), known as Eleanor Egg, began her track and field career with the Paterson Girls’ Recreation Program in 1923. Her relay team achieved an outdoor world record in 1925. Egg went on to compete in the broad jump, setting a world record in 1927, the 100-yard dash, and the shot put. She was a heroine in Paterson, where a bronze bas relief of her by sculptor Gaetano Federici was placed in the city’s Hinchcliffe Stadium.