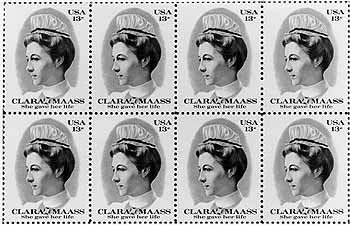 Nurse Clara Louise Maass (1876-1901) of East Orange volunteered to participate in an immunization experiment against yellow fever in Cuba.

The first time Maass was bitten by an infectious mosquito, she contracted a mild case of the disease which caused doctors to believe that she was immune. The second bite, however, proved fatal. Maass succumbed to the disease at the young age of 25. Her death convinced doctors and researchers that yellow fever was caused by the mosquito. The Clara Maass Memorial Hospital in Newark, a city where Maass received her nursing degree and served as head nurse at the Newark German Hospital School of Nursing, is named in her honor.