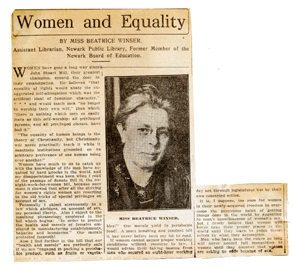 Beatrice Winser (1869-1947) was the director of the Newark Public Library and the Newark Museum.

Early in her career at the Newark Public Library, Winser offered books to public school classes that didn’t have access to libraries at school. She also opened libraries in union halls and made sure the library paid attention to the needs of its patrons. In 1915, Winser was appointed as the assistant director and secretary of the Newark Museum. She became the first woman in Newark’s history to become a member of a governing body when she was appointed to the Newark Board of Education that same year.

Toward the end of her productive career, Winser became the archivist of the New Jersey branch of the World Center for Women’s Archives (NJWCWA). Its purpose was to collect and preserve in a central archive all historical records related to women.