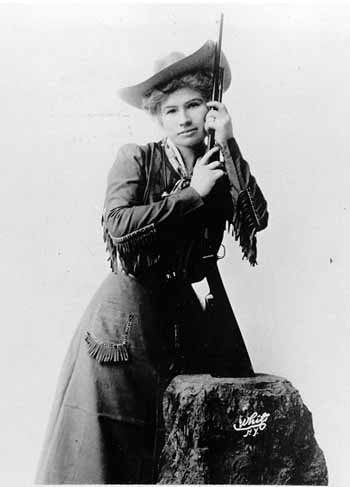 Sharpshooter Annie Oakley (1860-1926) began her career with a vaudeville shooting act in the late 1870s. She reached international fame when Oakley and her husband Frank Butler joined Buffalo Bill’s Wild West Show in 1885. Oakley had initially grown into an expert sharpshooter as a child—she would help to support her family by selling the wild game she had killed.

During the 1890s, at the height of her fame, Oakley and her husband wintered in Nutley. In 1894, she and others from the Wild West Show met in West Orange where Thomas A. Edison made a kinescope of their performance. Throughout her career, Oakley performed for Queen Victoria of England and Kaiser William I of Germany. As a member of the Wild West Show, Oakley toured in France, Spain, Italy, Germany, and England.