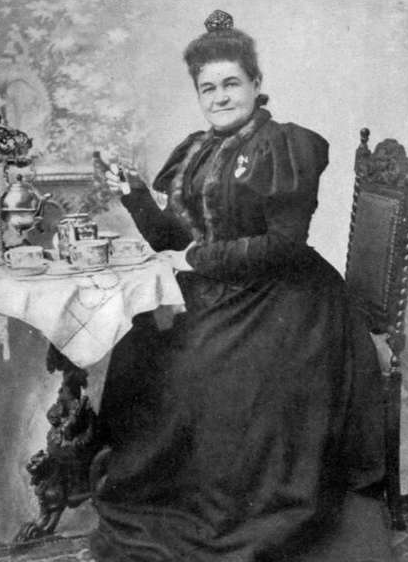 Writer and homemaker Mary Virginia Hawes Terhune (1830-1922) began her first novel at the age of sixteen.

It was published by her father in 1854 after it was rejected by a formal publisher. Her novel Alone was an immediate success, and when republished two years later it sold more than 100,000 copies.

Terhune’s minister husband Edward Payson Terhune was called to preach in Newark where the couple remained for the next eighteen years. She continued writing despite her home, parish, and civic responsibilities. Terhune served as the President of the Women’s Christian Association of Newark for which she raised money, counseled, and found jobs for poor young women.

A prolific writer, Terhune published fourteen novels between 1857 and 1873. Among her published works was a book entitled Common Sense in the Household. The instructional guide was written in 1871 for the beginner homemaker and launched Terhune’s name to the best-seller list. Her book was translated into French, Spanish, German, and Arabic. Terhune’s success in the homemaker industry encouraged her to publish numerous articles, syndicated columns, and lectures related to household themes. She still believed that women found their highest fulfillment as wives and mothers, but also suggested that these roles should not overshadow active involvement in other positions of power.

Fahs, Alice. “The Woman’s Page.” In Out on Assignment: Newspaper Women and the