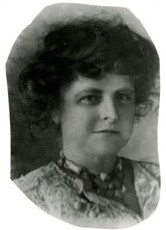 Born on October 31, 1852, in Randolph, Massachusetts, Mary E. Wilkins Freeman was one of two children to survive to adulthood out of four siblings. She was raised in a Congregational family with ancestors dating to 1645 in New England. She and her family moved to Brattleboro, Vermont in 1867. There, Freeman graduated from Brattleboro High School and attended Mount Holyoke Seminary for one year and continued her education at Mrs. Hosford’s Glenwood Seminary. She and her family moved back to Randolph in 1873 when her father’s business failed.

As a child, Freeman read fairytales and continued her love of literature into adulthood. She read Charles Dickens, Edgar Allen Poe, Nathaniel Hawthorne, and Leo Tolstoy, along with female writers such as Sarah Orne Jewett and Harriet Beecher Stowe. She wrote stories about characters in New England with her friend Evelyn Sawyer. After moving back to Randolph, she began writing religious poetry. Though this poetry was never published, a short story titled “A Shadow Family” became her first publication. In her later works, Freeman wrote about strong female characters amid reserved male counterparts. Her adult and children’s short stories, poetry, and novels were popular.

In 1892, Freeman met Dr. Charles Manning Freeman in Metuchen, New Jersey. The couple married on January 1st, 1902, and built a home in Metuchen. She was thought of as a local celebrity and used Metuchen as the setting for a few of her novels. Throughout the rest of her career, she wrote many more short stories, worked on a film, and wrote eleven more volumes. Soon after husband became an alcoholic and drug addict and was committed to New Jersey State Hospital for the Insane in Trenton in 1920. Though she did not publish many other works during the 1920s, she was awarded the William Dean Howells Medal for her fictional work by the American Academy of Arts and Letters. She was one of the first women elected to the National Institute for Arts and Letters.

She passed away on March 15, 1930, and was buried in Hillside Cemetery in Plainfield, New Jersey. Her work still receives critical acclaim for work in the genre, especially “A New England Nun” and “The Revolt of ‘Mother.’”

Most of the articles found on America: History and Life database listed are more critiques of her works rather than on the authoress herself

How did Freeman’s childhood impact her work in writing?

Why were the Books “A New England Nun” and “The Revolt of Mother” critically acclaimed compared to Freeman’s other books?