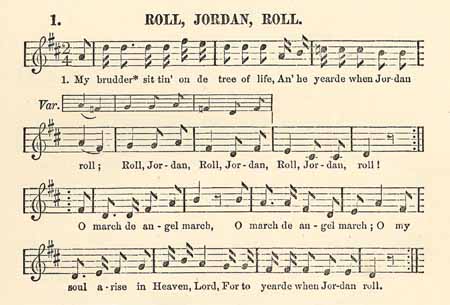 Lucy McKim Garrison was a musicologist born in Philadelphia, Pennsylvania, on October 30, 1842.

She was born to James Miller and Sarah Allibone McKim. Her parents and other family members were known throughout the abolitionist community and had connections to Quakerism. Garrison received her education in Philadelphia but later moved to Perth Amboy, New Jersey, to attend the Eaglewood School. At the time that Garrison attended Eaglewood, the Grimke sisters were managing it and the school was attended by many abolitionists. She taught piano in Philadelphia and at the Eaglewood School.

During the Civil War in 1862, Garrison traveled with her father, who worked for the Port Royal Relief Committee, to South Carolina to investigate conditions of recently freed slaves. For three weeks, they stayed in the Sea Islands where she listened to the songs of the freedmen and attempted to put the songs into musical notation. The public did not receive her work well upon some of her first publications, so the project was put on hold.

Lucy and Wendell Phillips Garrison, William Lloyd Garrison’s third son, became engaged in 1864 and married on December 6, 1865. In 1867, Garrison gave birth to their first son, Lloyd, and also created Slave Songs of the United States in collaboration with William Francis Allen and Charles Pickard Ware. The publication is considered one of the best sources of slave songs. The couple’s son Philip was born in 1869, followed by their daughter, Katherine, in 1873. Garrison died on May 11, 1877, following a paralytic stroke at age 34. She is buried in Rosedale Cemetery in Orange, New Jersey.

How dud Lucy’s musical upbringing help her in understanding and writing slave songs?

What did Lucy learn in the Sea Islands when she listened to the songs of the freedmen?

How did Lucy apply musical notation of slave songs? How were they received by the slaves in her time?

Katz Bernard. 1969. The Social Implications of Early Negro Music in the United States : With Over 150 of the Songs Many of Them with Their Music. New York: Arno Press : New York Times.https://www.worldcat.org/title/21670