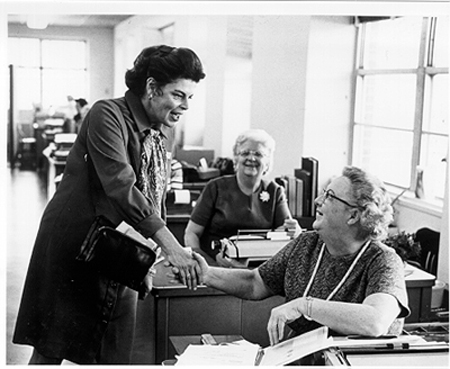 This organization of female representatives focused on federal legislation as a particular concern to women. At the start of her career, Meyner wrote a twice-weekly column for the Newark Star-Ledger and hosted a local television interview program from 1965 to 1968. Her improbable political career began in 1972 when the state Democratic Committee encouraged Meyner to run. Meyner lost this first election to Republican Joseph Maraziti. But, she defeated him the second time around when she challenged him yet again in 1975. Following this victory, Meyner claimed a seat in the 94th Congress which she held from 1975 to 1977. She served a second term as well. During her years in the House, Meyner was a member of the Committee on the District of Columbia, the Committee on Foreign Affairs, and the Select Committee on Aging.

Among one of her famous accomplishments as a House member was Meyner’s opposition to attempts made by nonaligned nations to suspend Israel from the United Nations. She supported the idea of forming a State Department board to oversee the creation of a center for conflict resolution. In 1976 she lobbied state Democrats to urge them not to repeal New Jersey’s endorsement of the Equal Rights Amendment to the Constitution. After leaving Congress, Meyner returned to Princeton to work for the state rehabilitation commission. She served on the boards of major corporations and consistently advocated for women’s equality in corporate management.