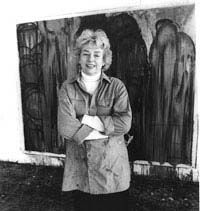 Grace Hartigan (1922-2008) was an internationally-renowned artist from Newark, New Jersey who was active in the visual arts from the 1950s onward as a painter and printmaker. Early in her career, she signed her work with the name George Harigan in order to find gallery representation and avoid sexism, as few women artists were able to show their works in the 1950s. Hartigan worked primarily in the Abstract Expressionist style, though she experimented with a variety of other styles, such as Pop Art. She knew many influential contemporary writers, including the poet Frank O’Hara, who dedicated several poems to her.

What encourage Hartigan to finally use her name when presenting her work?

How did Hartigan’s connection to influential contemporary writers affect her work as an artist?