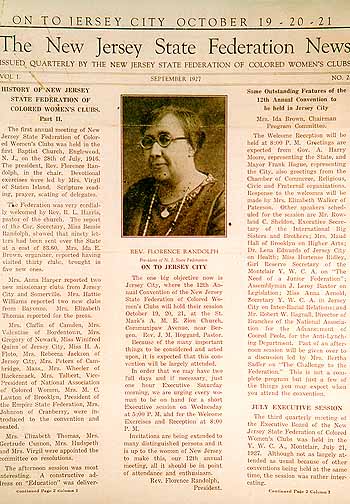 Florence Spearing Randolph (1866-1951) was a minister for the African Methodist Episcopal Zion Church.

She sought a license to preach in 1897 and although her gender caused friction among older AMEZ bishops and ministers, Randolph received her license. This allowed her to progress through the subsequent stages that led to her proper ordination as a minister. Randolph was ordained but initially only in the role of deacon. In 1903, she was ordained an elder in the church which allowed her to consecrate the sacraments and serve communion to church members.

In 1925, Randolph built her own church in Summit, New Jersey. She retired in 1946 after 21 years of active ministry in Wallace Chapel. Throughout her professional career, Randolph also served as President of New Jersey Women’s Foreign Missionary Society and played a role in the creation of the society’s Bureau of Supplies. The Bureau worked to coordinate the collection and distribution of all donations to foreign mission fields. In her role as secretary of the society, Randolph was awarded an opportunity to travel throughout the interior of Liberia and Gold Coast to gain firsthand knowledge of the AMEZ foreign mission field. Finally, Randolph organized the NJ State Federation of Colored Women’s Clubs, where she served as its president for 12 years and was also an Executive Board member of the NJ Woman Suffrage Association.

Where did Randolph get the support to build her own church in Summit, New Jersey?

What are some of the roadblocks Randolph faced as a female Minister? How did she overcome them?

What were the donations to foreign Mission fields used for?