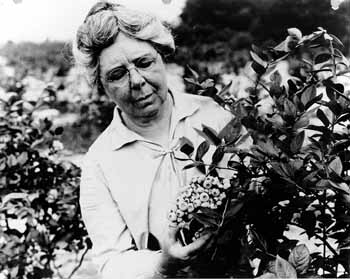 Her father was the sole executor and manager of a 600-acre cranberry farm now known as the 3,000-acre plantation of Whitesbog. She assisted researcher Frederick Coville in his studies of blueberry propagation. Once Coville moved to Whitesbog, at White’s suggestion, to continue his work. White helped locate wild blueberry bushes with desired traits; she asked woodsmen about berry size, vigor, resistance to cold and disease, flavor, texture, and time of ripening. Coville cross-fertilized bushes by hand to create new berry varieties. By 1916, the pair had created the first commercial crop of blueberries.

White helped organize the New Jersey Blueberry Cooperative Association in 1927 and by 1986 the state’s blueberry industry ranked second in the nation. She was the first female member of the American Cranberry Association and the first woman to receive the New Jersey Department of Agriculture citation.

How did White’s family history in farming influence her career choices?

Why did White and Coville decide to look into blueberry propagation?

How did the US government acknowledge White’s achievements?