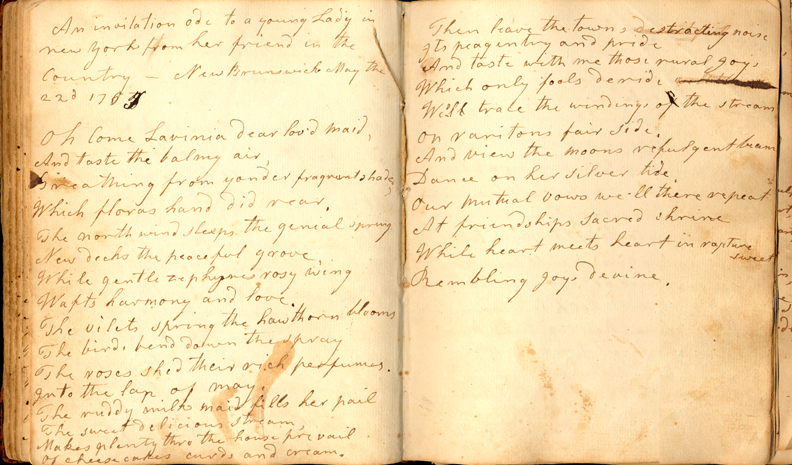 A Revolutionary Era patriot and poet, Annis Boudinot Stockton (1736-1801) transformed her Princeton estate of Morven into the center of culture and influence for the Princeton area. It has continued to occupy this role for over 200 years.

Stockton began her life as a poet shortly before her marriage to Richard Stockton, a notable New Jersey lawyer and eventual signer of the Declaration of Independence. Throughout her lifetime, Stockton wrote a large collection of poems on themes of courtship, marriage, friendship, nature, patriotism, and grief. Stockton never moved to publish her poetry because she was always uncertain about the appropriateness of women’s work being published. Nevertheless, in 1985, a manuscript volume of Stockton’s poetry was donated to the New Jersey Historical Society by one of her direct descendants.

During the Revolutionary War Battle of Princeton, the Morven estate was pillaged by British troops. Animals have driven away, furniture and books were burned and the family lost a number of valuable documents and sentimental keepsakes. Around this time of her life, Stockton began to write with a great deal of political awareness. She wrote themes for Colonel Philip Schuyler and on the death of General Joseph Warren at Bunker Hill. General George Washington was to later praise Stockton for her poems on his performance at the Battles of Trenton and Princeton. Stockton also ruminated on the surrender of Lord Charles Cornwallis and the British army throughout her writings.

Mulford, Carla, ed. Only for the Eye of a Friend: The Poems of Annis Boudinot Stockton.

Mary Wollstonecraft’s A Vindication of the Rights of Woman.” Legacy 25, no. 2