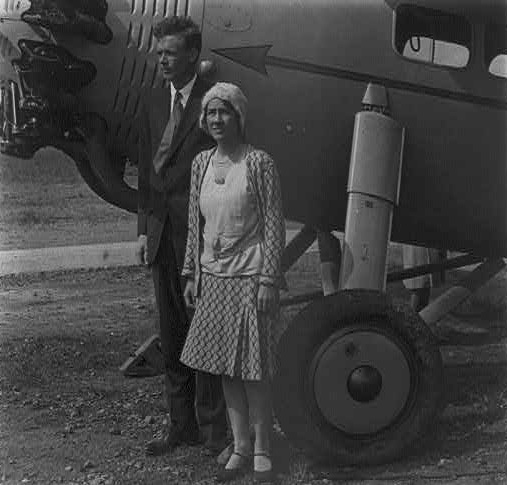 Image from the Library of Congress, Prints and Photographs Division, Washington, D.C., LC-USZ62-51268

Anne Morrow Lindbergh (1906- 2001) was an accomplished pilot, navigator, and writer who was also known for her role as the counterpart to famous husband Charles Lindbergh.

With only one day of instruction, Lindbergh became the first woman in the country to receive a gliding pilot’s license. A few months before her first child was born, Lindbergh served as a navigator on the initial coast-to-coast flight with her husband. Charles’ new plane broke the transcontinental speed record. In 1933, her role as copilot and operator on a 40,000-mile venture around the Atlantic earned Lindbergh the Cross of honor of the United States Flag Association. One year later, she also received the National Geographic Society’s Hubbard Gold Medal for achievement in exploration.

After her husband’s death, Lindbergh prepared five volumes of her own diaries and letters for publication. This collection included memories of the very public and infamous kidnapping of Lindbergh’s first child, Charles Augustus. A gifted writer, Lindbergh won the first book award of the National Council of Women of the United States for Gift from the Sea, a “mediation” to reconcile the dual roles of wife, mother, and creative writer.

How did Lindbergh receive a gliding pilot’s license after only one day of instruction?

What was Lindbergh’s husband famous for? Why was she known for her role as his counterpart?

what are some of the stories and experiences Lindbergh wrote about in her diaries and letters?