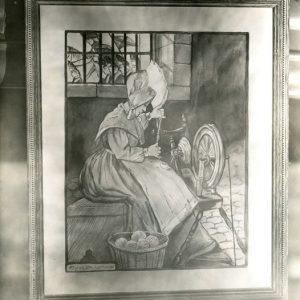 At age 23, she married James Whitall and the couple inherited a 96-acre farm along the Delaware River. Together they raised nine children, though only seven survived to adulthood. Throughout the latter half of her life, Whitall kept a diary on a regular basis and often discussed Quaker’s meetings, events within her family, and daily life on the farm. She emphasizes her spirituality by citing Bible verses and making personal connections with each sermon.

During the American Revolution, the Whitall farm became a battlefield. Before the war American soldiers constructed Fort Mercer on the Whitall property in the spring of 1777. On October 22, 1777, approximately 400 Americans were met by 1,200 Hessians attempting to secure the Delaware River for secure passage of British supplies to Philadelphia. It is rumored that Whitall remained in her home and aided in tending to wounded soldiers, both Hessian and American, while her family left the farm for safety. It is also said that Whitall chose to remain in the house despite a cannonball bursting through the side of the home and disturbing her spinning. These myths surrounding Whitall speak to her upbringing as a Quaker Friend, as well as her determination to protect her home.

On September 23, 1797, Whitall succumbed to yellow fever during the epidemic that struck the Philadelphia region. Two of her sons and two grandchildren also perished from the illness. She is buried on Woodbury Hill, the Friends’ cemetery, in an unmarked grave. Her diary, documenting her life from February 1760 to 1762, is preserved at Haverford College in Pennsylvania.