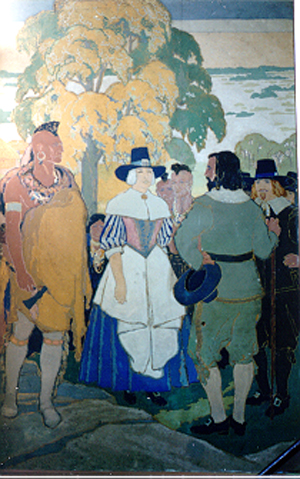 This painting of Sarah Kiersted was created by Howard McCormick in 1936 under the Federal Arts Project. It is located in the Anna C. Scott School in Leonia and depicts Sarah Kiersted translating for Lenape chief Oratam. Kiersted was a Dutch housvrou in New Netherlands who learned the Lenape language and served Chief Oratam as a translator in his negotiations with Dutch colonists. She was rewarded by him in 1666 with a gift of 2260 acres of land on the Hackensack River in what is now Ridgefield Park, Bogota and Teaneck.