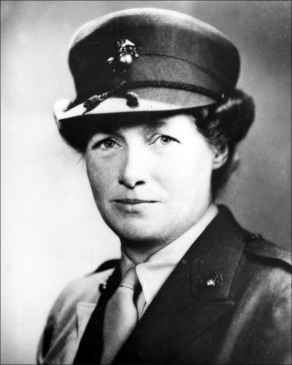 Ruth Cheney Streeter (1895-1990) of Morristown was appointed the first director of the U.S. Marine Corps Women’s Reserve by President Franklin D. Roosevelt in 1943.

Before this appointment, Streeter served as president of the Visiting Nurse Association in 1923. She was a member of the board of the Morris County Children’s Home. In this role, Streeter reorganized the home from a residential institution to a foster home placement agency. In 1930, she was appointed to the New Jersey Board of Children’s Guardians and served as a board member of the NJ Conference of Social Work, and remained involved in the League of Women Voters of New Jersey.

During the Depression, Streeter was appointed to the State Relief Council where she was responsible for the distribution of food and other forms of aid to needy families. Streeter also became the first female president of the Morris County Welfare Board in 1935 and continued in this role for seven years.

A 45-year-old Streeter bought a yellow single-engine airplane and received her commercial pilot license in 1942. One year earlier, Streeter had been appointed as the only female member of the Committee on Aviation in the New Jersey Defense Council. As the director of the Women Marines, a title bestowed on her by President Roosevelt, Streeter was responsible for approximately 19,000 enlisted women and 1,000 officers who served under the direct command of male Marine Corps officers at their various bases.