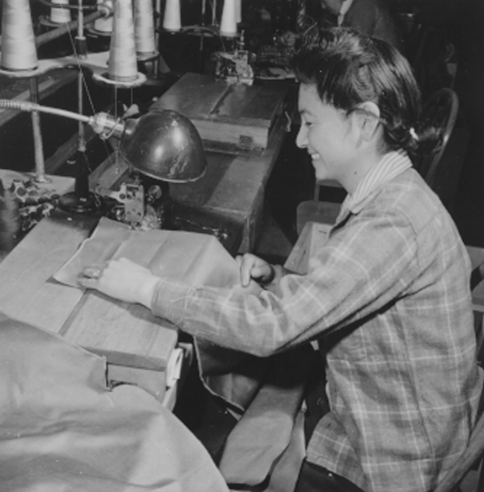 As a Japanese-American woman living through World War II, Mary Yamashita Nagao (1920-1985) was interned at the Manzanar Relocation Center in Owens Valley, California under Executive Order 9066.

Determined to make the most of her internment, Nagao found a job as a social worker and liaison between those interned and the camp authorities. In this role, Nagao was able to use her linguistic abilities, high energy, and friendly demeanor to serve as an advocate of minority rights and a leader in Japanese-American affairs.

Toward the end of the war, Nagao and her family relocated to Upper Deerfield Township to work at Seabrook Farms. Nagao rose to the position of production forewoman and became a union representative for the Amalgamated Food and Meat Cutters’ Union, Local No. 56, which represented frozen food and cannery workers in southern New Jersey. Many of those workers were immigrants. Later in her career, Nagao worked at the Cumberland County Clerk’s Office in Bridgeton, served on the Atlantic Electric Company Roundtable Committee, and filled the office of president of the volunteer advisory group to the Cumberland County Office on Aging. She also served on the Advisory Board of the Retired Senior Voluntary Program and was president of the Japanese American Citizens League (JACL). Nagao was awarded the national JACL Silver Pin for her important contributions on behalf of the Japanese-American community in New Jersey.

In 1984, Nagao received the Outstanding Senior Citizen Award from Governor Thomas Kean for her “leadership, guidance and efforts on behalf of the Elderly Population of New Jersey.” That same year, Nagao and her husband were presented with a citation by the Board of Chosen Freeholders. They were celebrated as Outstanding Citizens of Cumberland County.