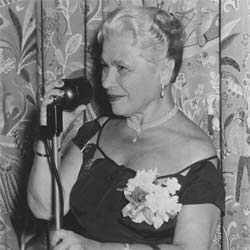 From the Smithsonian Libraries

A Russian immigrant, Rosenthal landed in Hoboken in 1904 and her remaining family members followed suit in 1909. The clan established A. Cohen & Sons and ran a reputable business as wholesalers of silverware, cut glass, and clocks.

In the early 1920s, Rosenthal and friend Enid Bissett opened a dress shop on W. 57th Street in Manhattan. The duo joined creative forces to design a new type of undergarment for women. Dresses of the era were rather boyish, and as a result, many women bound their breasts with a plain strip of cloth to achieve a flat-chested appearance. Rosenthal and Bissett transformed this brassiere into a more comfortable garment. They altered the design from a simple band that hooked in the back to the bandeau design. The team cut the band in half and gathered it with tucks to form supportive cups. Rosenthal and partner Bissett at first gave away the new undergarment to women who purchased one of their dresses. The bandeau proved extremely popular; the women began to manufacture them out of silk and sold them for a dollar.

By 1938, Maiden Form Company grossed annual earnings of more than $4.5 million. In the late 1940s, Rosenthal created an ad campaign that was to be one of the most effective campaigns in advertising history. The printed advertisements displayed fashionable young women engaged in many different activities and wearing nothing above their waists but Maidenform bras. The ad ran for 20 years and propelled the company to international fame. In 1960, Rosenthal changed her company’s name from Maiden Form Company to Maidenform, Inc.