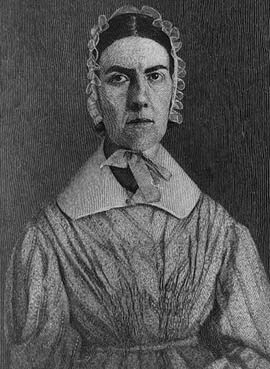 Image from the Library of Congress, Prints and Photographs Division, Washington, D.C., LC-USZ61-1609

Influenced by her sister and lifelong partner in the abolitionist cause, Weld converted to Quakerism. She joined the Philadelphia Female Anti-Slavery Society in 1835. She spoke out publically against slavery and her strong abolitionist beliefs ultimately created a schism between Weld and the Society of Friends. Weld refocused her efforts on the American Anti-Slavery Society where she served as an agent in 1836. She worked as part of a group that presented antislavery petitions to state legislators and the U.S. Congress.

The sisters wrote letters, which were published in the press and reissued as pamphlets, on the topic of equal rights for women. Weld gave the opening day address at the 1838 Anti-Slavery Convention of American Women in Philadelphia. Anti-abolitionists rioted outside the hall and eventually burned down the building by the time the convention had reached its third day.

In 1839, Weld and her sister published a document entitled Slavery As It Is, which presented testimony to the evils of slavery collected from southern sources. Both sisters also taught at Eagleswood Academy, a coeducational and racially integrated school located within the utopian community of Raritan Bay Union. The school was run by Weld’s husband, Theodore.

Lerner, Gerda. The Grimké Sisters from South Carolina: Pioneers for Women’s Rights and

Lumpkin, Katharine D. The Emancipation of Angelina Grimké. Chapel Hill: The University of

Lahr, Angela. “’Bowed in the Dust’: Guilt and Conscience in the Life of Angelina Grimké

Nelson, Robert K. “’The Forgetfulness of Sex’: Devotion and Desire in the Courtship