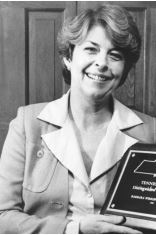 Image from Notable Women throughout the History of Hunterdon County

Politician Barbara McConnell (b.1936) has served the New Jersey state government for more than 30 years as a political figure, business executive, and public policy adviser.

She began her fruitful career as a staff assistant to a member of Congress. In 1991 Governor Florio appointed McConnell to his Cabinet. McConnell served under Florio as New Jersey’s first woman Commissioner of the Department of Commerce and Economic Development.

Before her political appointment, McConnell served for thirteen years as the President and Chief Executive Officer of the New Jersey Food Council. She spent two terms in the state General Assembly, a position that spanned five years. An experienced businesswoman and politician, McConnell accepted a position as the Executive Director of the New Jersey Division of Tax Appeals during Governor Brendan Byrne’s administration. She also served as the former President and CEO of the National Food Industry Association Executives and is the current Trustee and Vice-Chair of the state’s Clean Communities Council.

Over the years, McConnell has received the Outstanding Democratic Woman of the Year Award (1969) and the Distinguished Alumni Award from the Business School at Tennessee Tech (1980).